aren’t u jealous;)  what a blast i had tonite.

my brush with fame, the hot and happening Chef Ludo Lefebvre of LudoBites in celebrating bulthaup Los Angeles’s new showroom.  Ludo’s the real deal – not just someone who looks like a rock star but has awesome talent not to mention being super nice~ 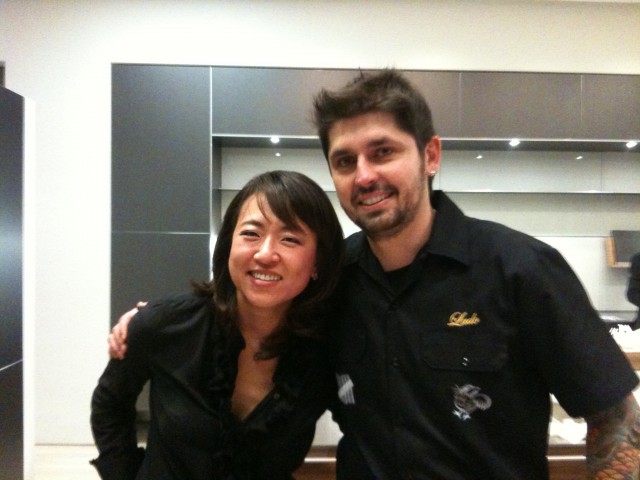 Not only was the new showroom gorgeous with beautiful design and functionality (hello?  solid stainless island, I’m in love!) – but I’ve been dying to check out LudoBites and was never able to get in.  But tonite – I not only got a pic with Ludo but also experienced his creative and beautiful culinary bites that almost had me becoming a stalking fan/groupie. What a coincidence.  Me – a small aspiring chef with bold but healthy flavors of “perfect umami bites” and Ludo – LudoBites:)  I’ll save my soap box and dive right into the menu.

I had to be one of those crazy, star-struck fans who took pictures of everything, checking out his knives, kitchen gadgets…isn’t his cutting board cool?  Where can I buy one of those?? 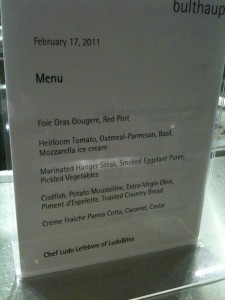 1. fois gras gougere or cream puff with red port.  light yet decadent, the cream puff was a little dry but the whole experience was pretty cool.  luscious cream that almost disappears once you’ve eaten it, making you want to pop in another one.  It was pretty funny though as it was NOT a one-biter for me and in the midst of me trying to look cool while holding my champagne in the other hand, the fois gras oozed all over my fingers as I looked to my husband – “Help!  I’m looking like a slob and need napkins please!” 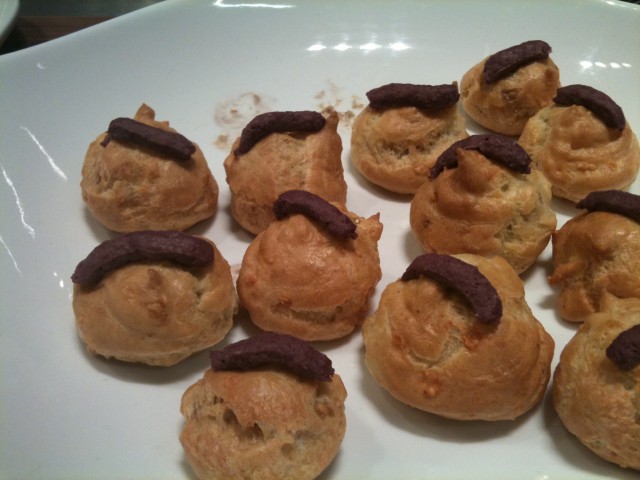 2. Ludo’s version of caprese with heirloom tomato, oatmeal parmesan, purple basil and mozzarella ice cream.  Heaven! Just the right juxtaposition of umami, sweet, salty, creamy and crunchy.  How did he do that mozzarella ice cream?  I give you props Chef Ludo – that was pretty original. 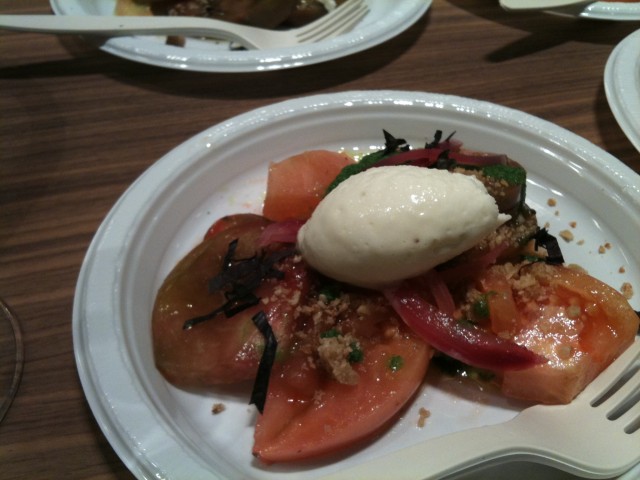 3. The star of the night – the hanger steak with smoked eggplant puree and pickled vegetables.  The hanger steak?  I had to ask Ludo – how did you marinate it?  It’s freakin’ awesome! He says (in his leeetle french accent) – “I poot a leetle soy sauce, geenger, zum sugar, you know, a KOREAN marinade but weeth zum other stuff” – his secret ingredient, I’m sure.  It was so tender and perfectly seared, not too salty and plenty of flavors that went beautifully with the pickled radish and cauliflowers – which were sliced so thinly that it took you a while to figure out it was cauliflower.  I could eat that by the jar.  The fatty umami meat cut with the crunch and the acid of the pickled veggies and balanced by the bitter eggplant.  Beau-ti-ful.  (No pix:(  None to show you cuz we ate them all – but promise they were supreme).

4. Perfect comfort food and apparently a “very old french kooking” – salted cod with luxurious velvety mousseline or I’ll just call it salted cod and mashed potatoes drizzled with olive oil and some chili flakes.  I think I had at least two of these.  Few bites of this and you just want to get in your pajamas and snuggle up.  Pure comfort food, like mac-n-cheese:) 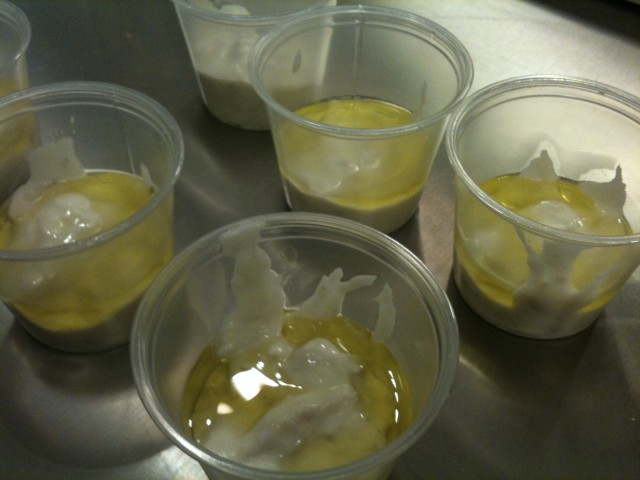 5. Creme fraiche panna cotta with caramel and CAVIAR.  Who would have thunk it?  and I don’t even like caviar (I may be the first to admit it but there. I said it).  But t’nite makes me wonder if I’ve just had bad caviar as the combination of the firm, sweet panna cotta with the salty/sweet/smokey caramel teased or cut with the salty caviar – that was simply brilliant.  In retrospect – I think it could have used some crunchy texture but it was a pretty beautiful cloud nine. 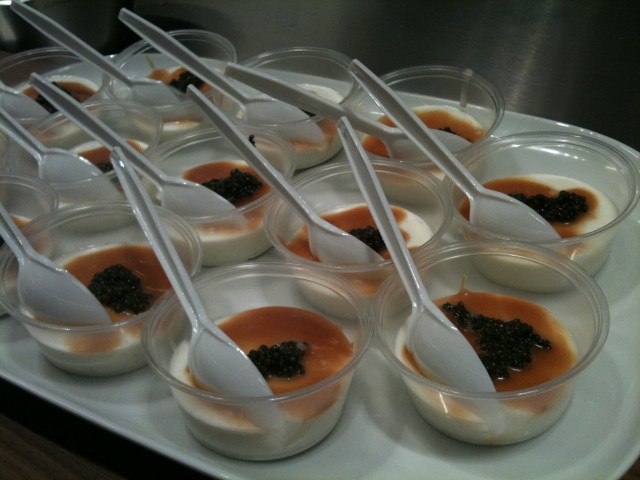 I hear he’s going to host Elton John’s Oscar party next weekend so I feel very lucky to have experienced tonite.  And he said something about a TV show he’s going to be in soon – so that he won’t have the next Ludobites until July or so.  I’ll watch out for you on TV, Ludo:)

You’ve made me a fan, Ludo – and can’t wait to taste your new culinary creations at the next Ludobites~  Thanks for the inspirations and much thanks to bulthaup for making it a wonderful nite.

Leveraging a lifelong passion for food and combining a unique cultural mesh of korean cuisine, robust flavors of Texas BBQ and California cuisine, Chef Kelly brings her own signature style to delectable perfect bites exploring complex and often surprising interplay of flavors, textures and colors. She has honed and shared her craft through her experiences from five star restaurant kitchens to private cooking instruction to her self-written food blog at chefkelly.com all made with 2 tablespoons of love; love for food, love for life.
View all posts by chefkelly →
This entry was posted in All things foodie related, becoming a chef and tagged bulthaup, bulthaup la, bulthaup showroom, caprese, foie gras, hanger steak, ludo lefebvre, ludobites, panna cotta, pickled vegetable. Bookmark the permalink.