CNY or Chinese New Years is today, February 3rd but guess it could also have been yesterday since they’re a day ahead of us here in the USA.

The year of the rabbit according to the holidayspot says that 2011 is going to be a “placid very much welcomed year after the year of ferocious tiger in 2010”  And somewhat ferocious 2010 it was –laid off from work, got another job and welcomed two new puppies into my world (albeit not so ferocious;)).  Hope that means that with all this craziness of the world that things may soon be more peaceful and pleasant leaving room for relaxation, laughter and happiness.  Along with that – some bonus – “money can be made without much labor”, it says but don’t be lazy or take advantage of it.  Sounds like a fortune cookie or my grandma lecturing me on one of her sayings, huH?!

In celebration of CNY – which btw is celebrated by MANY many Asians and not just Chinese – I wanted to share a recipe as well as some traditions and symbolisms associated with CNY. I’m also excited to be hosting a fabulous CNY cooking class at Linda Press’s pad this weekend meeting many power supergirls who seem to make it all happen and doing it with finesse and a smile.

Morning of CNY – Korean families including extended relatives gather around the table to make dumplings; meant to bring luck and wealth kinda like black eyed peas, I guess.  And along with dumplings, Korean rice cakes (pronounced “duk” or “taeok” according to wiki) are a must.  My mom says that over the history of Korea that these tasty rice cakes of all colors, sizes and variations has come to symbolize celebrations of life because rice was hard to come by and was often enjoyed by the aristocrats or special occasions only.  So with time, rice cakes has become like birthday cakes; enjoyed at these special life moments such as CNY, birthdays and even deaths.  And eating rice cakes on CNY is symbolic of turning a year older; obviously you couldn’t double count cny + your bday but when older Korean people like my grandma asks you how old you are – you are supposed to assume you’ve already turned a year older that year even if you haven’t celebrated your birthday yet, confusing and not fair, huh?

Homemade Dumplings (inspired by flavors of chef kelly, of course)

–        1 lb. ground pork (You can use a mixture of pork/beef/bison even chicken & actually used elk provided by Ms. Press for this recipe)

1) Start boiling water in a large pot – this is where the dumplings will be cooked if boiling is the way you want to go.  You also have the option of pan frying it (~2 min on each side with a drizzle of oil) which takes longer and has more of a “snack” appeal than a formal meal.

2) In a large bowl, combine all ingredients until mixed thoroughly.

3) Dumpling assembly: you’ll need a bowl filled with water, a teaspoon and a tray lined with parchment paper & sprinkled with some flour so that your assembled dumplings don’t stick.

5) Take a teaspoon of the dumpling “stuffing” and lay it right in the middle being careful not to get it toward the edge.  Flip one side of the dumpling skin to the other side until it becomes a half circle.  Then take special care to individually seal the edge (so that stuffing does not explode out) by pinching your thumb and index finger around the entire edge inch by inch. Set aside on a tray.  Repeat.  Trust me – it’s a lot easier and fun to have the entire family/friends involved in this project as making it is almost as fun as eating itself.  And don’t be intimidated by the sheer # of dumplings – you can easily freeze them (freeze them individually on a tray and then store in a ziplock bag) and store up to 1-2 mo.

6) Place dumplings into the boiling water and cook until translucent and floating to the top – about 3-4 minutes.  Drain and serve with dipping sauce. 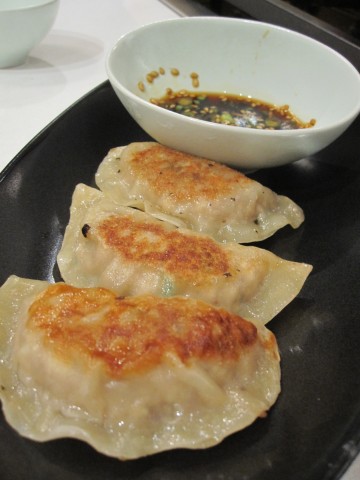 1) Mix all ingredients and serve with dumplings.

Korean rice cakes are usually served with the dumplings in a beef broth soup and eggs drizzled in like egg flower soup.  For this recipe – I’ve made the fun “snacking” dumplings:)

Leveraging a lifelong passion for food and combining a unique cultural mesh of korean cuisine, robust flavors of Texas BBQ and California cuisine, Chef Kelly brings her own signature style to delectable perfect bites exploring complex and often surprising interplay of flavors, textures and colors. She has honed and shared her craft through her experiences from five star restaurant kitchens to private cooking instruction to her self-written food blog at chefkelly.com all made with 2 tablespoons of love; love for food, love for life.
View all posts by chefkelly →
This entry was posted in becoming a chef and tagged chinese new year, dumpling recipe, korean rice cake. Bookmark the permalink.